Thermal spraying is a well established, extremely versatile technology that is commercially used to produce a wide variety of coatings for applications ranging from jet engines and medical implements to pump seals and bicycle rims. Thermal spraying encompasses a group of processes that are capable of rapidly depositing metals, ceramics, plastics, and mixtures of these materials. Thermal spray processes can be grouped into three major categories: plasma-arc spray, flame spray, and electric wire-arc spray. These energy sources are used to heat a coating material (in powder, wire, or rod form) to a molten or semi-molten state. The resultant heated particles are accelerated and propelled toward a prepared surface by either process gases or atomization jets. Upon impact, a bond forms with the surface and subsequent particles cause thickness buildup. The major thermal spray processes are:

Each process has different cost, materials flexibility and coating performance capabilities. As a surfacing technology, however, thermal spray is compatible with most materials, is affordable, rapid and can produce relatively thick (0.010″ to 0.100″) protective coatings. Although thermal spray coatings have been in use for over 100 years, they are now of high enough quality that key aircraft engine components and biomedical prostheses are routinely coated. Many industrial components can be protected and have their lives renewed, extended or enhanced using thermal spray. Hard, wear-resistant, coatings are used in automotive engines, insulators are sprayed, chemical reactors are repaired against corrosion, pumps are restored, bridges are coated and aircraft bodies and engine parts are protected. Thermal Spray consists of a group of different processes in which powders or wires of metallic or non-metallic materials are deposited onto a substrate. The main element that these processes have in common is that they all use a heat source to convert powders or wires into a spray of molten (or sometimes semi-molten) particles. This heat source is either electrical or chemical (combustion). Pending on the material being applied and the equipment being used, we can apply coatings with either mechanical bonds up to 5000 PSI or Semi-Metallurgical bonds. With all processes, the Substrate is not heated above (250°F), therefore no distortion takes place. 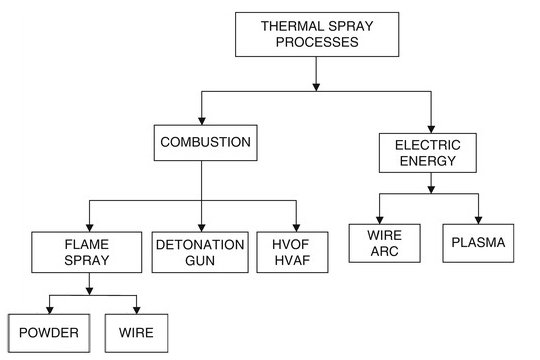 Wire Spraying: With this process, a specially designed gun is used, having a nozzle (similar to a welder’s heating torch) which burns Oxygen and Acetylene achieving temperatures up to 5500°F. A wire is fed through the center of the nozzle into the flame where it is melted. Compressed air is concentrated around the flame atomizing the molten material into fine spherical particles and propelling these particles at high velocity onto a specially prepared substrate. By controlling the rate of feed of the wire through the flame, we can control the melt and atomization of metals with various melting points. With this gun, any wire may be sprayed which has a melting point below 5500°F.

Powder Spraying: In this process, the basic principle of the heat source is the same as for wire spray except that powders are fed through the flame and propelled by high velocity Oxygen or air onto a Substrate. As with metallizing, any powdered metal or ceramic having a melting point below 5500°F. can be sprayed. This gun is mainly used for Hard Surfacing.

Electric Arc: Spraying This equipment is comprised of DC Power Supply combined with a specially designed Spray Gun. Two wires are fed simultaneously through the gun at an angle so as to meet as they exit from the gun. The wires are insulated from each other but at the point where the wires exit from the gun, one wire is charged positive and the other negative, causing them to throw a molten arc between each other. Just behind this point we inject high velocity air or inert gas which atomizes the molten arc and propels the atomized particles onto the substrate. The temperature of the arc is controllable to a maximum of approximately 10,000°F. With this equipment, we can spray any type of metals which have melting points below 10,000°F.

HVOF: The High Velocity Oxygen Fuel (HVOF) process was developed to produce high quality metal, carbide and various specialty coatings. A complete line of powders are available, which are specifically engineered for application with the HVOF System. The commercialization of this coating technology now affords industry the ability to get unique coating properties and extend the range of applications which previously could only be performed by proprietary coating processes.

Plasma Spray: When Plasma spraying, the plasma is created by an electric arc burning within the nozzle of a plasma gun. The arc gas is formed into a plasma jet as it emerges from the gun nozzle. Powder particles are injected into this jet where they melt and then strike the surface at high velocity to produce a strongly adherent coating. Almost any material can be sprayed including metals, ceramics and plastics. The work piece remains cool because the plasma is localized at the gun. Applications for plasma sprayed coatings can be found in all industries – ranging from scuff resistant coatings on piston rings to thermal barriers on turbines and abrasion resistant coatings in the textile and paper industries.

Combustion Wire systems are the oldest form of a thermal spray application device. The basic principle of operation is that the system uses Oxygen and a fuel gas (such as acetylene, propane, mapp or natural gas) to create the heat necessary to melt the wire that is the feed stock material. The wire is normally held on a separate wire holder and is on a spool or coil. It is fed through the gun by a air or electric powered drive mechanism and the oxygen and fuel gas are combined and ignited to form a heating zone that is used to melt the wire and with the use a confined stream of compressed air the molten droplets are propelled to the substrate. The working temperature of the heating zone is 4600-4800 degrees F. and the velocity of the particles is about 800 feet per second. 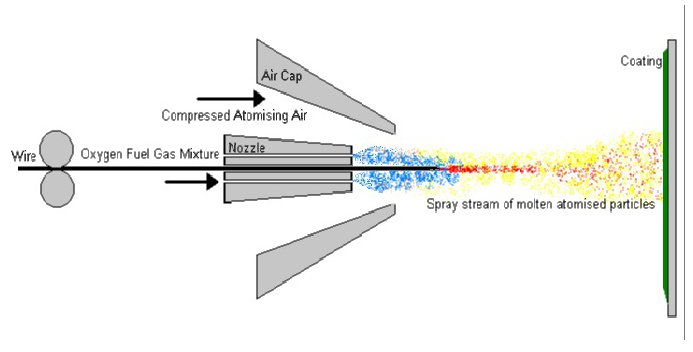 The plasma gun is comprised of a copper anode and tungsten cathode, both of which are water-cooled. The plasma gas, typically argon, nitrogen, hydrogen, or helium, flows around the cathode and through the anode, which is a constricted nozzle. The plasma is initiated by a high voltage discharge that causes localized ionization and a conductive path for a DC arc to form between the cathode and anode. The resistance heating from the arc causes the gas to reach extreme temperatures, dissociate and ionize to form plasma. The plasma exits the anode nozzle as a free or neutral plasma flame or plasma which does not carry electric current. This is different than the Plasma Transferred Arc coating process, in which the arc extends to the surface to be coated. When the plasma is stabilized and ready for spraying, the electric arc extends down the nozzle, instead of shorting out to the nearest edge of the anode nozzle. This stretching of the arc is due to a thermal pinch effect. Cold gas around the surface of the water-cooled anode nozzle being electrically non-conductive constricts the plasma arc, raising its temperature and velocity. Powder is fed into the plasma flame most commonly via an external powder port mounted near the anode nozzle exit.

The Arc Spray Process utilizes a pair of electrically conductive wires, which are melted by means of an electric arc. The molten material is then atomized by compressed air and propelled onto a substrate surface. The impacting molten particles rapidly solidify on the substrate to form a coating. This process is referred to as cold process (relative to the substrate material being coated) as the substrate temperature can be kept low during processing avoiding damage, metallurgical changes and distortion to the substrate material.

HVOF is a thermal spray system utilizing the combustion of gases, such as Hydrogen or a liquid fuel such as kerosene. Fuel and oxygen mix and atomize within the combustion area under conditions that monitor the correct combustion mode and pressure. The process creates a very high velocity, which is used to propel the particles at near supersonic speeds before impact onto the substrate. One of the basic rules of spraying is that high combustion pressure = high gas velocity, high particle velocity and resulting high coating quality.

One of the key benefits of this system’s high velocity is the extremely high coating density and low oxide content. The low oxides are due partly to the speed of the particles spending less time within the heat source and partly due to the lower flame temperature (around 3,000 °C) of the heat source compared with alternative processes. 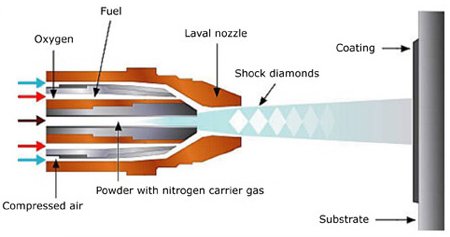 Page load link
To help improve performance and personalize content, we use cookies. By clicking on or navigating the site, you agree to allow us to collect information on and off the site through cookies. I Agree
Go to Top